when they came / for you/ elegies/ of resistance

"a wholly absorbing mediation on, and a reclamation of, a politicisation of aesthetics."
Ali Alizadeh, Overland 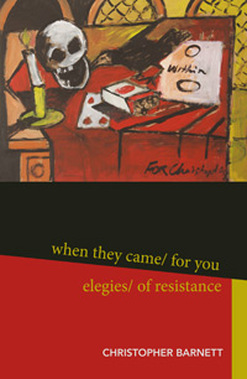 Available in all good bookshops or from Wakefield Press

A limited edition of 50 signed by the author and accompanied by a facsimile print of the cover image, 'Circle within Circle' by Anthony Oliver is availabe only from Stickybooks.


Young Turk, Furkan Dogan is pumped full of bullet holes, cut down by Israeli gunfire as he and his comrades try to break the Gaza blockade and draw attention to the Palestinian plight. He is only 19.
An ageing poet pumps himself full of holes with a syringe of insulin to stave off his own demise - the death that came to Furkan too soon.
The poet remembers not just Furkan's particular murder, but through it he laments the loss of his own beautiful youth. As he speaks to the dead boy through all time 'whenever that was', Barnett recalls his own passionate engagement with the world; his influences, political and cultural, and loves lost.
In this solemn act of remembering, the poet pulls onto his shoulders the terrible weight of 'this world gone wrong' and bears it for us all.
Continuing a tradition of Mayakovsky and Hikmet to read to people publicly 'to confront people more than to console them', this is a social poem to 'like' and 'share' mouth to ear.
In a culture that longs for closure, this will leave all your doors hanging open.

A documentary film, These Heathen Dreams ( by film-makers Anne Tsoulis & Georgia Wallace Crabbe) is currently in final stages of production. Using observational footage shot in France, and archival film dating back to the 60’s Australia where, as a thirteen-year old prodigy street poet, Barnett is seen marching in a Vietnam moratorium demonstration alongside Lyn Arnold, the future Premier of South Australia, this documentary examines the contribution of an Australian artist, who many acclaim as one of its great living writers. Text from his recently published poem, when they came/for you elegies/of resistance, which acts a Greek chorus throughout the documentary, gives an insight into the power and poignancy of Barnett’s writing.